How much should I be paying for dent repair? 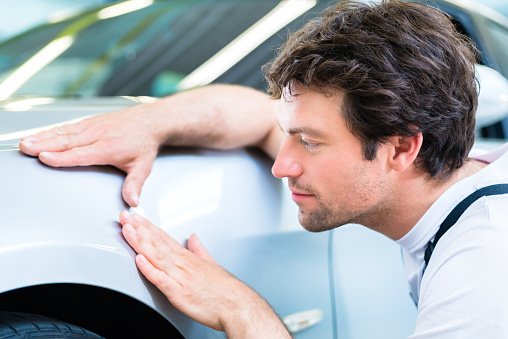 Dents are a common type of damage that vehicles sustain. Most often they are caused by accidents or collisions with other vehicles but they can also be caused by the effects of the weather. Dents tend to be noticeable, diminishing both the quality and value of a vehicle. Unrepaired dents may eventually begin to rust, especially if the paint has been deeply scratched, further damaging a vehicle making it more costly to fix. As well, serious dents and damage could affect the performance of a vehicle or make it unsafe for the road.

Depending on the circumstances and amount of damage to a vehicle, getting a dent fixed could be costly. Minor dents are relatively easy to repair. If there has been no paint damage then a paintless dent removal should be a repair option. Bigger dents caused by more serious accidents or collisions will likely require more time and work to repair because they need to be filled and repainted. If a dent covers a larger area of a vehicle then it may be necessary to replace an entire panel which will cost substantially more to repair.

In this article we will discuss the costs of repairing dents, if auto insurance covers the cost of dent repair, whether small dents are worth fixing, and what paintless dent repair is.

What are the costs of repairing dents?

The cost of large dent repair may be surprising to some but it is important to think about the materials, time, and labor it takes to fix them. The cost of parts and skilled labor does not change with older or newer vehicles, however, modern vehicles are built using newer manufacturing technology so it tends to make auto body repairs more expensive. Large dent repairs involve multiple steps such as stripping, filling, sanding, priming, painting and blending multiple color layers, and polishing. The damage caused by a dent may also be more significant than it appears making the repairs more challenging and costly.

What is Paintless Dent repair?

Paintless dent repair or removal (PDR) is a method where dents are removed from a vehicle’s body without retouching paint finish by either pushing or pulling the dent. So long as the paint surface is intact, this specialized type of dent repair can be used on aluminum or steel vehicle panels with impressive results. The repair technician either pushes on the panel’s backside to pop out the dent or uses a special bonding tool to pull the dent out from the front side. By doing so the dent can be removed without any need to repaint or refinish the damaged area.  Certain insurance providers may already have affiliations with repair shops that offer paintless dent removal that they may require you to have your vehicle sent to. Be sure to double check with your provider to see if this type of repair service is covered and offered at any local repair shops so that you can any dents fixed quickly and at cost.

Does auto insurance cover the cost of dent repair?

Should you file a claim if you have dent damage on your vehicle?

The answer to this depends on who caused the accident, the severity of the dent, and the age of the vehicle. If it is a minor dent that you have caused then it may not be worth filing a claim for as you would likely save more money by paying for the cost of repairs out of your pocket.

Should not Claim Accident

The Hidden Costs of Claiming

Claims and Deductibles
When you report a dent to your auto insurance provider, your claim will be reviewed by an adjuster who will determine whose fault the accident which can decide whether you have to pay a deductible. If the dent was caused too long ago or if the adjuster thinks that you may have caused the damage or that it was not the result of an accident then your insurance provider may not cover the costs of the repairs. If the accident is considered to be your fault or an at-fault accident, then your premium will likely rise anywhere up to 40 percent. So it is important that you take the time to weigh the costs of the repair and check it against your existing insurance coverage to make sure that you are making the best and most informed decision for your particular repair circumstances.

Are small dents worth fixing?

After determining the costs associated with any small dent repairs you should consider whether it is worth fixing. If you have a relatively new vehicle then you may prefer to have small dents or imperfections fixed as soon as possible so that you can enjoy it in its best condition. As well, keeping a new vehicle in good condition is important if you are thinking of eventually selling it or trading it in for another model at some point in the future as you will want to have the best possible return of your investment.

If you have an older, things to consider before you decide to repair dents.

If you are not intending to keep the vehicle for much longer then you should probably leave the damage, especially if you can safely drive with it still. Any damage to the vehicle will also likely lower the resale value so you need to keep this in mind when you want to either resell or trade it in for another vehicle.  If the cost to repair the dent damage is close to or more than the value of the vehicle then it is probably not the best idea to have it professionally repaired. Finally, your deductible cost needs to be considered as well. If your deductible is high on an older vehicle then it may not be worth it either. In this case you should consider trying to lower that deductible and looking into other solutions for repair.

Try not to stress too much about small dent repair unless the damage is more than your deductible or if you are unable to safely drive your vehicle. No one likes to have blemishes like dents or scrapes on their vehicle but if you can save some money by not claiming and getting the damage repaired yourself then you could avoid paying higher insurance premiums. Repairing small dents using DIY solutions can be done successfully but it is recommended that you seek professional advice from a certified technician or mechanic before trying to do so. At the very least you should be calling local repair shops to get an estimate on the repair damage before you make any decisions to do so.

Ultimately, before you commit to getting any dents fixed or paying for any repairs, weigh the costs of repair against the value of the vehicle, be sure to check your insurance for appropriate coverage, and make sure that you call your local repair shops and get any free estimates you can so that you can make the most informed decision.